Chefs for the Polls project hands out snacks during Milwaukee voting 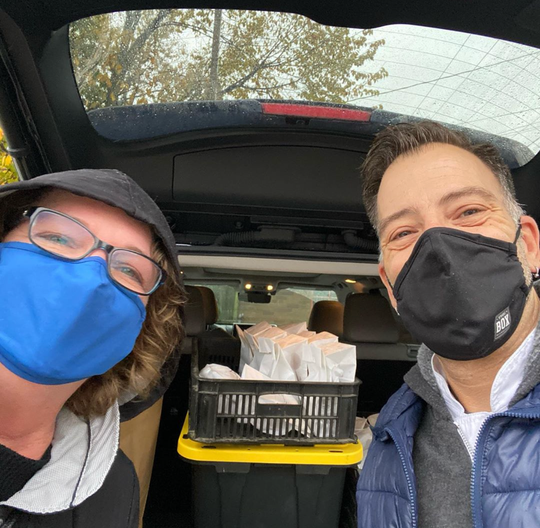 Amilinda chef Gregory León, right, and friend Barbara O’Leary brought cookies made at the restaurant to hand out as snacks near polling places on the near northwest side and the south side Friday. It was part of the national Chefs for the Polls project, funded by World Central Kitchen. (Photo: Courtesy of Gregory Leon)

Chefs for the Polls, a national project by chef Jose Andrés’ World Central Kitchen, is supplying free food near polls during early voting and on Election Day in at least 23 U.S. cities, including Milwaukee.

The project serves a dual purpose: to feed anyone who’s hungry — whether they’ve been standing in line to vote or are just passing by — and to help support local restaurants hurt by the pandemic and recession. They’re compensated for making and distributing the snacks.

Chefs for the Polls has been mobilized in cities including Los Angeles, Phoenix, Dallas, Chicago and Baltimore.

Caitlin Cullen, the chef-owner of the Tandem restaurant on the north side, is coordinating the effort in Milwaukee at the request of World Central Kitchen. She previously received funding from World Central Kitchen to supply free meals to the community during the early months of the pandemic, in partnership with 50 area restaurants.

Many of those restaurants that made community meals for the Tandem to give away in spring are taking part in the Chefs to the Polls project, supplying snacks such as cookies, tacos and pizza slices.

One of the chefs taking part Friday morning was Gregory León of the downtown restaurant Amilinda. The restaurant made chocolate chip, frosted oatmeal and snickerdoodle cookies to hand out near the Midtown Center and Zablocki Library polling places.

RELATED: Here’s how and where to vote early in person in the Milwaukee area before the November election

“Everybody was super friendly; they were very excited to get a treat,” León said. “It’s good to see everyone doing their civic duty.”

He and a friend drove to various early-voting locations to find the busiest spots. “The lines were moving pretty well,” he said. Midtown Center, he said, “was packed, but it was in and out, in and out.”

Lines were long Tuesday, the first day of early voting. Four restaurants were giving away snacks that day, including the mobile wood-fired pizzeria Flour Girl & Flame.

Because of Tuesday’s crowds, World Central Kitchen decided to fund snacks for the rest of early voting in addition to Election Day, Nov. 3, Cullen said.

Cullen said she was in the line of people who waited 3½ hours in the rain to vote at Riverside High School in April for the primary election.

“A bagel sandwich would have changed the entire experience,” she said.

Our subscribers make this reporting possible. Please consider supporting local journalism by subscribing to the Journal Sentinel at jsonline.com/deal.

← The best food processors of 2020: Cuisinart, KitchenAid, Braun and more
A Taste for Travel? Finnair to Sell Plane Food in Shops | Business News →