When La Madeleine closed in Addison in January 2019, North Texans lamented the loss of a reliable, homegrown French bakery in an easy-to-access area north of Dallas. But good news comes nearly two years later: The company opened a new restaurant a quarter-mile away, on Feb. 8, 2021.

The new La Madeleine, north of Belt Line Road at Montfort Drive, is a prototype — a test to see if this new style of bakery is popular among customers. It takes the place of a former Steak ‘n Shake.

Notably, this restaurant has a drive-through.

Longtime La Madeleine favorites like the tomato basil soup and chicken Caesar salad will remain on the menu. New items include a Nutella croissant muffin and savory croissant “pockets.”

This shop also has a bigger coffee menu, with frappés and honey lavender lattes.

Diners still can eat inside the restaurant if they choose. But here, options abound: dine-in, grab-and-go, order ahead for curbside or order at the drive-through. It’s a significant change for the Dallas company, which opened its first restaurant in 1983 on Mockingbird Lane near Southern Methodist University.

Correction at noon on Dec. 3, 2020: This story previously stated that the La Madeleine in Addison will have the brand’s “first-ever drive-through.” A restaurant in Grapevine once had a drive-through, though it closed more than 10 years ago. 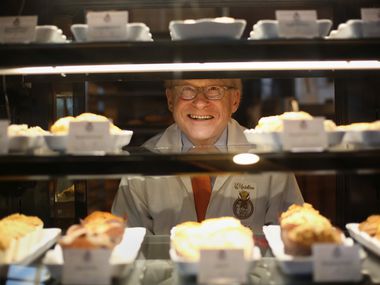 ← Earth Day cooking class with Top Chef Portland’s Sara Hauman
The 2020 Guide to Ghost Kitchens: All You Need to Know →